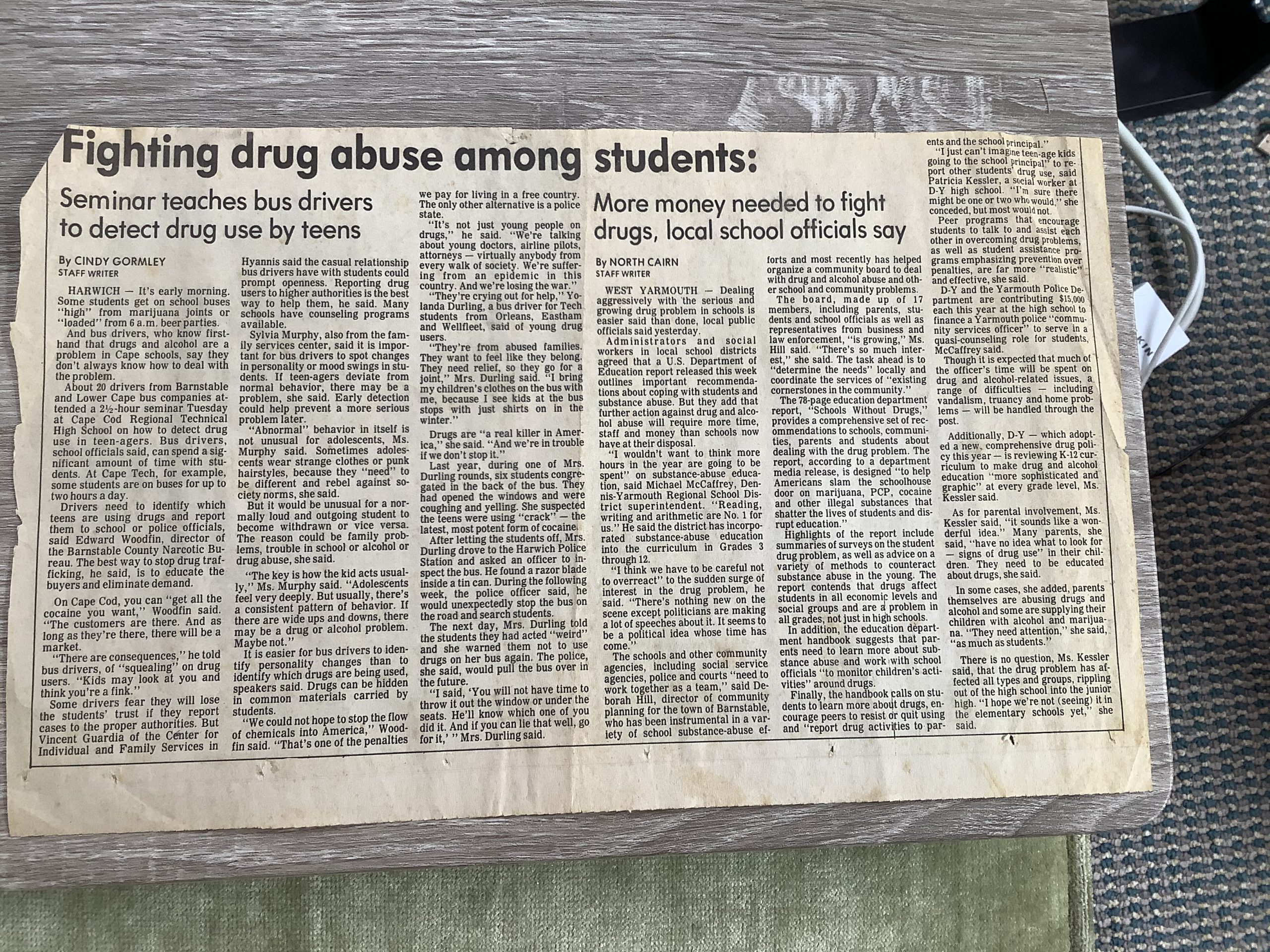 Lisa sent us a photo of a Cape Cod newspaper article from the late ’70s or early ’80s that her mother, Yolanda Durling, had saved.  Here is Lisa’s note and a few quotes from the article that show that we are still dealing with the same issues today as 40 years ago:

I just came across this article in my mother’s papers from 40 years ago, the late 1970s to early 1980s. My mother was a bus driver and a strong children’s advocate with very strict Italian rules for whatever “house” she ran. She absolutely brought clothes with her to give to the kids who didn’t have any, bought food for the kids and their families, and took on the role of adding structure and awareness (discipline unasked at times for sure, but also rewards).

I am struck by the timelessness of this article, and am so grateful that because of your efforts at RecoveryBuild there is another option besides the police and the same family that they may be running from.
Stay well and much love,
Lisa

It’s early morning.  Some students get on school buses “high” from marijuana joints or “loaded” from 6a.m. beer parties.  And bus drivers. . . know first-hand that drugs and alcohol are a problem in Cape schools.

“They’re crying out for help,” Yolanda Durling, a bus driver for Tech students said of young users.  “They are from abused families.  They want to feel like they belong.  They need relief, so they go for a joint.  I bring my children’s clothes on the bus with me because I see kids at the bus stops with just shirts on in the winter.  Drugs are a real killer in America and we’re in trouble if we don’t stop it.”

“Reaching the Hard to Reach: Empowering Community Members to Think Differently and Embrace Teens with Substance Use Disorder and Mental Health Challenges During the Time of COVID” by Stephanie Briody for the National Library of Medicine New England Region. Read more here. . .

Addiction and COVID-19: A Conversation with Dr. Anthony Fauci and Dr. Nora Volkow

Send Us A Message

RecoveryBuild is here to help your teen initiate, maintain and sustain their recovery in an atmosphere of safety, empathy, trust, honesty and compassion.

RecoveryBuild is a program of Behavioral Heath Innovators, Inc. a 501(c)(3) organization.